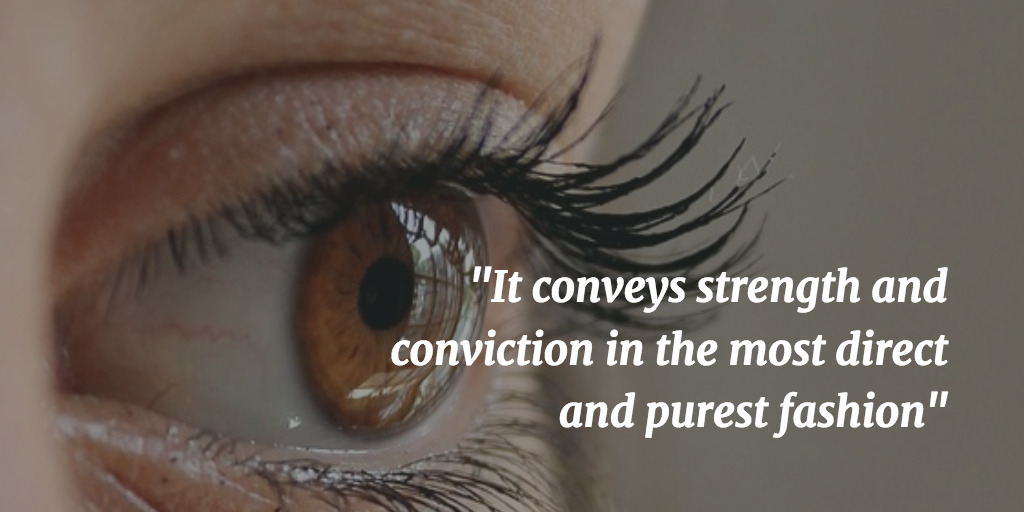 Eye contact is pretty much where it all begins. Your story as a man unfolds as soon as you meet her gaze.

Back in the day when I was a young buck, gormless and shy to the hilt, I had no clue how vital eye contact was and would tend to avert my gaze when in an interaction as much as possible.

Only later in my journey and through thousands of experimental approaches did I truly grasp that the ability to look into the eyes of anyone, be they male or female is crucial in any interaction

It conveys strength and conviction in the most direct and purest fashion, just as much as it can betray weakness and a lack of self-belief in the most brutal fashion. Studies have shown that people who make good levels of eye contact with others are perceived as being:

In the Daygame Blueprint we show that the first instance of any real interaction with a girl should be preceded by a laser beam moment of eye contact, I am talking 2-3 seconds is all that a woman needs to know what kind of man she is about to meet.

Back to the stone ages

If we go back in evolution it will make a lot more sense as to why women are hard wired to make instantaneous gut feeling decisions, in the big bad jungle of cavemen and caveladies, in which billions of years of genetic programming was developed, a woman had to feel and cold read almost within seconds the vibe of the guy who was approaching her, was he an enemy who was about to kill her, was he a weakling whose babies she could do without, or was he a beautiful soul whose babies she wanted.

The verdict had to be made within seconds, hence this incredible ability now that women have, the ninja instinct deduction they always trust and go with, rightly or wrongly when it comes to a suitor.

Hence you can imagine how imperative it is that you make the first few seconds of eye contact count with all the belief and power you can muster, i.e. convey the beautiful and sexual man energy you have towards her with the purity of eye contact and she will no doubt respond in kind. Similarly if your inner confidence and peace is off balance for a few minutes/hours/days, she’ll instinctually react accordingly.

In practical terms, as demonstrated in the Daygame Blueprint, when you’ve ran out ahead of her and as your in the motion of turning, catch her eye as soon as you can, so by the time you’ve actually stopped her in her tracks you’ve said a “Hey!” at most.

This way you’ll have had 2-3 seconds of initial eye contact, which as I’ve explained is pretty much all she needs to learn of your intent and you’ll have her entranced during the capture phase as you deliver the immortal lines…

“Excuse me can I just tell you something…”

The first minute or so of the interaction should be all about strong eye contact and self-centered presence, a lot more than what your saying, your utterances are almost immaterial in the first 30 seconds in fact, hence the reason we keep the opener so simple and easy going.

So I hope next time you hit the streets you’ll appreciate this little nugget of truth, shifting your focus onto the decisive initial moments in an interaction as opposed to “what do I say next” mentality which tends to befuddle a lot of beginners.

Thanks for checking out the new site and watch out for my updating this space on a week-by-week basis, furnishing you with gems as I sally forth on my adventures.

Our goal is to provide you with the right information that will help you on your journey to becoming a better man.